You are here
Home > Practices > Death and Dying-Helping Animals 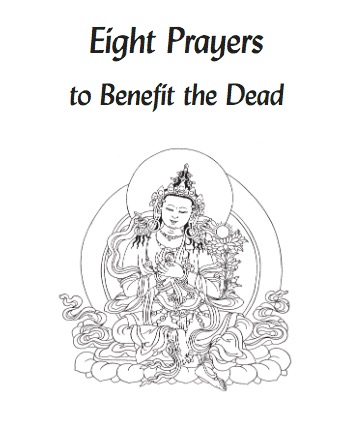 As Buddhists, we should be reasonably familiar with practices to help sick, dying or dead people, but for some reason we often are not sure what to do for animals.

The following information should help you find appropriate prayers and practices to help those animals around you, whether it be an elderly pet, an injured animal at the roadside, an insect in trouble or an animal long since passed away. Downloading and reciting the Eight Prayers to Benefit the Dead is also highly recommended.

Firstly it should be remembered that these practices are done in the context of the Buddhist understanding of the mind and body being of different natures. The body dies but the mind or consciousness passes to a new rebirth. As the animal realm is considered to be one of more suffering and less potential than the human realm, we want to do everything in our power to help that being’s consciousness to find a higher rebirth. A very important condition for a better rebirth is for the being to have a calm mind at the time of death. Also, being in contact with holy objects (statues, stupas, holy images and mantras) purifies negative karma and accumulates merit for that being which will help in this regard.

‘If you love your animal very much then this is what you must do for them for their good rebirth and quick liberation from samsara.”

WHEN THE ANIMAL IS DYING OR HAS DIED:

“If you come across an animal who is dying, this is the first thing you would recite into their ear.”[10]

Recite mantras: Om mani peme hung, Heruka mantra and Heruka root mantra, and other mantras such as Milarepa and Namgyalma mantras. Recite the mantras and blow over the body. You can recite the long mantras 21 times or more and the short mantras one mala or more. Blow strongly on the body after each time or you can blow on water, visualizing each deity absorbed into the water; each drop has the power to purify negative karmas. Then pour the water on the animal; all negative karmas are purified.

There’s a mantra paper to put on dead bodies to purify [Click here to Download]. This is written especially to put right on the body – put it right on the skin, on the forehead or the chest.

When the animal is in the process of dying or even after the breath has stopped, if you have some sand from a Kalachakra sand mandala, you can mix it with butter and put it on the crown. Each sand grain has numberless Buddhas abiding in it. It’s especially good if it is blessed by His Holiness the Dalai Lama.

Then burn the body. If there is a good practitioner or a lama available to do the puja Jang.wa, then do that when the body is being burned.After the body is burned, keep some pieces of bones, and if possible, do Jang.wa again on the bones. Crush the bones and make powder.Mix with other material and make a stupa, or more than one stupa. Put the stupa in a garden if you have one and then flowers can be offered to the stupa. Dedicate to your animal for a good rebirth and enlightenment.

WHAT YOU CAN DO FOR YOUR ANIMALS IN EVERYDAY LIFE

It’s not enough that you keep the animals and they give you comfort. You must do something of practical benefit towards them. This is what you can do everyday:

Take them around holy objects – circumambulate. Everyday you can put on a table many tsa-tsas and statues, and take the animal around chanting mantras at the same time. This way it also helps the person who carries the animal around.

Recite prayers in their ears, verbally, to plant the seed of all the realizations of the path to enlightenment.

This makes a huge difference. It has inconceivable result, unbelievable result. That makes them have a good rebirth next life, to be born as a human being and meet the Dharma.

There is a story when Buddha gave teachings to 500 swans in the field and the next life they were born as human beings, became monks, and they all became Aryan beings, able to achieve the cessation of suffering and the true path. So the result is unbelievable, just by hearing Dharma words. Vasubhandu, Lo.pon Yig.nyen, was reciting the Abhidharmakosa and a pigeon on the roof heard this everyday. One day the pigeon died and Lo.pon Yig.nyen checked to see where he was born. It was in a family who lived down below in the valley. He went down and saw the child and asked if he could have him and the family gave him to Lo.pon Yig.ngen. The child became a monk named Lo.pon Lo.den and became an expert on the text which he had heard when he was a pigeon. He wrote four commentaries on that text. Therefore, it’s extremely important to recite Lam.Rim prayers and mantras – at least the mantras – to animals.

It’s also extremely good before you give them their food, to bless it. If you can’t do it at every meal, then you can bless it all at once. Recite the five powerful mantras if you know them and otherwise recite Om Mani Peme Hung, Medicine Buddha and Milarepa mantras. All this has power; it helps anyone who eats it to not get reborn in the lower realms, it blesses their mind and purifies negative karma. If one can, do it every time you feed them – recite the mantras and blow on the food. This is the biggest present you can give them: good rebirth, finish samsara, liberation, and the positive imprint of the Mahayana teachings and mantras also to lead to enlightenment.

Especially for Buddhists who have animals, when the animals die, it should be different for their future rebirth. So one should attempt to have a special rebirth for them. So that’s why I asked the people who take care of our dogs at Tushita in Dharamsala. That time, Tseyang-la, who is a translator at many centers and built the Kopan nunnery, and Maureen, a student from New Zealand who taught at Kopan for quite a number of years and then worked very hard at Tushita, and for me, asked me to recite the Maitreya Buddha prayer and mantra, the Lama Tsong Khapa praise to Guru Shakyamuni Buddha – Having Found the Realization of Dependent Arising – and other prayers and mantras to the dogs, while holding a biscuit in the hand, so everyone waits, like listening to the teachings, eyes looking at the biscuit and everyone is humbly sitting, like respectfully listening to teachings, all their eyes looking for the biscuit. We gave some of the dogs away, and along with the dogs was the commitment to recite a Lam.Rim prayer or mantras. Some people did it for years. One lady from either the British or Italian Embassy in Delhi, who wasn’t a Buddhist, did the Lam.Rim prayer, The Foundation of All Good Qualities,; every day for years. Then one day, her maid left the gate open and the dog got lost. She was very upset. That’s because she must be a very kind person even though she’s not Buddhist; she did that prayer, she must be very sincere.

There’s a story about an 80 year old man. After he entered into the Mahayana path, when the time ripened, then he became enlightened, then he does perfect work for sentient beings, bringing every sentient being to enlightenment. So that means all that perfect work – enlightening all the sentient beings – came from himself being enlightened, and that came from having entered into the Mahayana path.Before that he was an Arhat and actualizing the path to liberation, which started from being a monk. He was able to be a monk because inconceivable eons ago, he was a fly following some cow dung around a stupa, so it became circumambulation – one circumambulation. So all these benefits – being Arhat, being enlightened, and enlightening all sentient beings – all these depended on the small merit by following the smell of cow dung which became circumabulation. So therefore, we should always keep in the mind how precious even one circumambulation is, how precious it is to take the animals around, and there’s no question about us human beings intentionally going around, how that has incredible benefit. So therefore, one circumambulation of a holy object – statue or stupa – one must do it; since karma is expandable we shouldn’t be careless even with small merit. All this means that each holy object is so powerful and can liberate so many sentient beings from suffering and bring them to enlightenment, and that it causes one to actualize the path. So therefore, even if one can’t build a big stupa, even to have a small stupa is unbelievably precious – the benefits you and other sentient beings get.

If you have many ants in your house, for example, then of course if you’re careless you kill them, but otherwise, with a soft tissue paper or soft cotton or broom or feather, pick them up and put them in a plastic bag and put some food in it. Put something they like, something they’re excited about or fascinated by and then close the bag and take it around the stupa or holy objects as many times as you can to liberate them from lower rebirth and to achieve liberation and enlightenment. Then you put them outside, releasing them by opening the plastic bag, or shake it on the ground with the food. The only way you can help ants and other insects is only if they come into your house, in your kitchen, in your room. Otherwise, there’s no way to benefit in this way. So this is a very good way, an excellent opportunity, to benefit the ants in addition to making charity by giving them food. If you take them around the stupa or holy objects, then there’s Dharma charity, and charity of fearlessness. By purifying their minds, you’re saving them from suffering. Also for dogs and cats, blessing the food with mantras is not only miscellaneous charity, but also becomes Dharma charity, charity of fearlessness, and charity of loving kindness because you have the intention to cause them happiness. So here you can practice all the four types of charity’. [3a]

Mantras for your animal to hear:

There is one CD that has different prayers on especially for animals, you can let this play so your animal can hear:

It is called “Recitations for Animals”

More information from Rinpoche on how to benefit animals:

For information on what mantras to recite, go to our Mantras page.