You are here
Home > Animal Facts

“Today, together with a growing appreciation of the importance of human rights there is a greater awareness worldwide of the need for the protection not only of the environment, but also of animals and their rights. Where there is a mind, there are feelings such as pain, pleasure and joy. No sentient being wants pain, instead all want happiness. Since we all share these feelings at some basic level, we as rational human beings have an obligation to contribute in whatever way we can to the happiness of other species and try our best to relieve their fears and sufferings”. His Holiness the Dalai Lama[1] 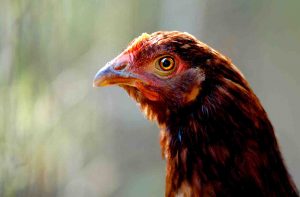 From a Buddhist perspective, all animals are considered sentient beings and have minds and ‘Buddha nature’, which is the seed of enlightenment. Those who have pets or have observed farm animals cannot disagree with the fact that animals have individual personalities and have very similar responses to humans to external stimuli – the cat who doesn’t want to get her paws wet on the dewy lawn, the cow who rubs an itch with such satisfaction, the chicken who runs to the feed bucket with eager anticipation. Just instinct, or are these the signs of our fellow earthlings on their very own pursuit of happiness?  Below are some examples that demonstrate how easy it is to dismiss animals as lesser beings simply because we do not understand their language.

Q: Which animal understands sophisticated intellectual concepts, learns from watching others, and has cultural knowledge passed from generation to generation?

Primates certainly do, but here we are talking about chickens [1].

What about this one: Q: curious and insightful, friendly, loyal and affectionate, thought to have intelligence beyond that of an average 3-year-old human child.

Did you guess pigs? Dr. Donald Broom, scientific advisor to the British government says that pigs “have the cognitive ability to be quite sophisticated. Even more so than dogs and certainly three-year-olds.”

Another one: Q: very loyal to their families and very protective of their partners and offspring, often refusing to leave an injured or sick mate or young behind.

Answer – geese. After a partner dies, some geese spend the rest of their lives without a mate, which can be up to 25 years!

This one might surprise you: Q: sensitive, with their own individual personality, excellent memories and able to avoid harm by watching and copying others in their group, some ‘eavesdrop’ to get information, and some use tools.

Fish. Marine biologist Dr. Sylvia Earle says, “they’re so good-natured, so curious. You know, fish are sensitive, they have personalities, they hurt when they’re wounded.”

And we haven’t even mentioned cows, who are described as intelligent, loyal animals who enjoy solving problems.