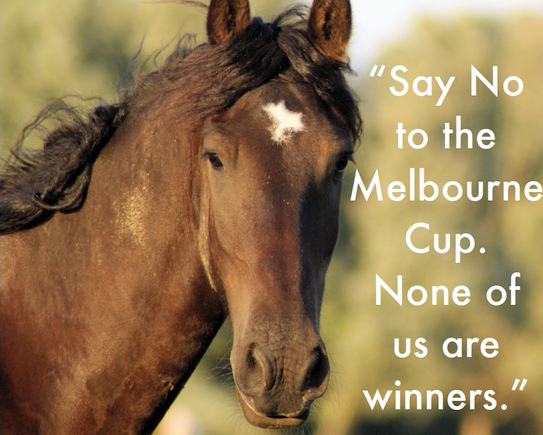 As you some of you may know, the annual Melbourne Cup horse race is held on the first Tuesday of November in Australia. Many Australians participate in placing a bet or watching it with colleagues at work.  We are asking that people boycott the event. Why?

Each year in Australia, around 18,000 foals are born into the racing industry. Less than one-third of them will ever race, and those that do will likely not race past their third birthdays. Approximately two out of every three horses used in the racing industry are discarded because of injury or lack of ability or because they are simply too difficult to manage before their first races. Nearly all horses who do race disappear from the track in less than three years. By age 3—when they are still physically immature—most horses have seen their last race. When horses become injured or suffer from chronic diseases, they aren’t “retired” to green pastures and loving homes. Many horses end their careers in slaughterhouses. Undercover investigations have revealed weak, emaciated horses shot in the head with a rifle—often in full view of other horses. Tens of thousands of horses are sold for slaughter every year. Some of their flesh is used in dog and cat food, and “prime cuts” are sold for human consumption in Europe and Asia.

It’s not just the horses’ deaths that are cruel. The horseracing industry is fraught with cruelty. Thoroughbred horses have genetic problems that are exacerbated by hard track surfaces, year-round racing schedules, and corporate owners who view horses as “investments” and race them too frequently in an effort to make more money. It is common for trainers and veterinarians to use drugs both legal and illegal to treat horses’ injuries, and often mask them.

Since horses begin stressful training and racing when their skeletal systems are still growing, many sustain muscle and joint injuries, fractures, internal bleeding, musculoskeletal trauma, and ruptured ligaments. Horses are often given painkillers (eg, Phenylbutazone) so they can continue to race with so-called minor injuries, which can lead to more serious injuries. Approximately 90 percent of horses used in the racing industry suffer from exercise-induced pulmonary hemorrhage, a condition that can leave blood flowing from their nostrils after a race.  The majority of affected horses, however, do not show external signs of bleeding.

As long as people continue to support horseracing, the industry will continue to abuse animals and profit from their suffering and misery.  Please boycott the upcoming Melbourne Cup and all horse races, and encourage others to do the same. And if you want to have some fun without the cruelty, join in some of the activities happening around the country in opposition to this profit driven cruelty (see below). Together we can reduce the number of horses who suffer from this abusive and costly “sport”.

For more information on horses racing, please go to http://www.animalsaustralia.org/issues/horse_racing.php

The Coalition for the Protection of Racehorses is organising a ‘Nup to the Cup’ picnic & protest on Melbourne Cup Day again this year.  They are hoping the day of food, fun and activism will draw attention to the plight of racehorses who don’t have a say.

How to Purify a Dog’s Karma