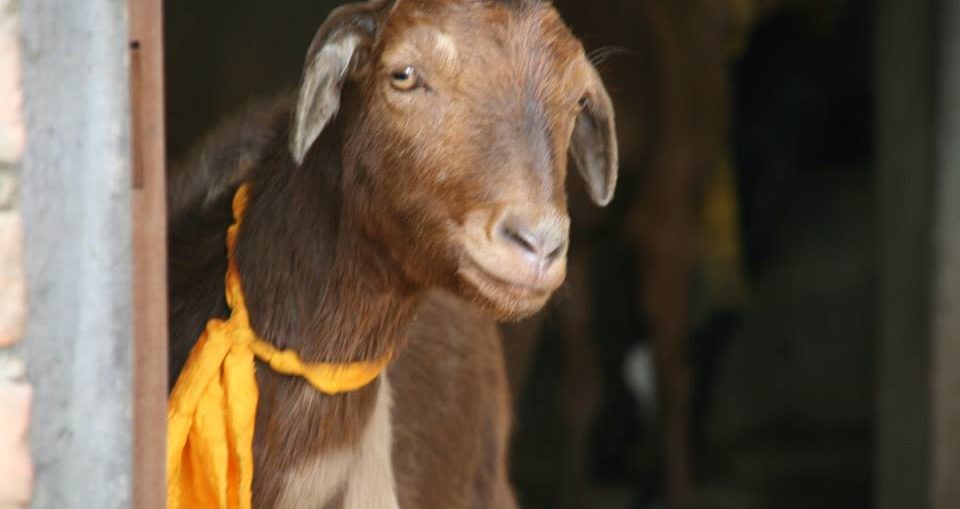 On 1st July 2015 we lost our dear friend Tamdrin the goat. Tamdrin was one of the earliest rescues that would become Lama Zopa Rinpoche’s Animal Liberation Sanctuary at Kopan Monastery, Nepal. He was a young goat when he arrived, as most are when they find themselves at a roadside butcher. Despite being the only goat without horns, he could stand his ground and enjoyed playing with the other young goats. He became quite familiar with the trips up to the stupas to do ‘korwa’ (circumambulation) and wouldn’t need any leading.

Tamdrin was witness to all of the changes and improvements to the temporary facilities behind Kopan Monastery from 2005 until the big move to the new land in January 2014. He survived the PPR (Peste des petits ruminants) outbreak in 2010 where over half the herd at that time died (10 animals). He often had problems with his feet, particularly in monsoon, but otherwise generally was in good health.

When all the monastery goats joined the nunnery goat ‘overflow’ in the big move to the new land and new shelters he was a bit suspicious at first but soon adapted to the new arrangements and seemed to be enjoying the place, along with his old friends like Jigme and Dorje. Unfortunately Jigme died at the end of December 2014 and Tamdrin grieved at this loss for some time.

He will be greatly missed. He would invariably come to say a special hello to the project coordinators no matter how long the duration since their last visit. He would offer up his hornless head for a scratch and a rub and then would lean on you in that friendly way goats show their trust and affection.

Tamdrin circumambulated and was ‘bopped’ with holy objects many times, as well as hearing sutras, prayers and mantras from many different people, including Kyabje Thubten Zopa Rinpoche himself.

Please include Tamdrin and all the animals at the Animal Liberation Sanctuary in your prayers and dedications to quickly achieve Enlightenment for the benefit of all beings.

RESPONDING TO THE DEVASTATION IN NEPAL

Nepal has been struck by its worst earthquake in 80 years. The human death toll is high as will be the animal death toll. The Animal Liberation Sanctuary, Kopan is in the zone of the quake. Our staff have been checking the animals to see if they are ok. Our friend Tree of Compassion is leading a disaster relief team on the ground in Kathmandu led by Phil Hunt, Tree of Compassion secretary and Animal Liberation Sanctuary Coordinator. Our first task is to assess and reassure our animals at the sanctuary, the cows in particular who are more easily frightened, followed by checking the safety of the shelters and the security of the fences. Our goats and resident dogs are quite adept at escaping should the opportunity arise.

There is currently no electricity or internet at Kopan and phone connection is quite difficult. We will be posting updates as they are available on our Facebook page (both Tree of Compassion and Enlightenment for the Dear Animals). Then we will be conducting outreach for the community with a focus on animals in need but also helping people. In a disaster of this magnitude, we anticipate animals will have a range of needs such as emergency veterinary care, emergency feed, shelter and so on.

As Buddhists, we will also be saying mantras to all the animals we come across and ‘bopping’ them with a small statue given to us by Lama Zopa Rinpoche for that purpose. We ask you to join us in saying prayers for all those sentient beings affected, human and animal alike.

An Indian court has banned animal sacrifice in the state of Himachal Pradesh at places of worship hopefully ending this old but very much outdated tradition. Goats and other animals such as sheep are killed with knives as ‘sacrifice’ to Hindu deities at certain times of the year in parts of the Himalaya. Many of the goats at the Animal Liberation Sanctuary, Nepal, have been rescued from these sacrifices as it is a widespread practice in Nepal.

What is Animal Liberation?