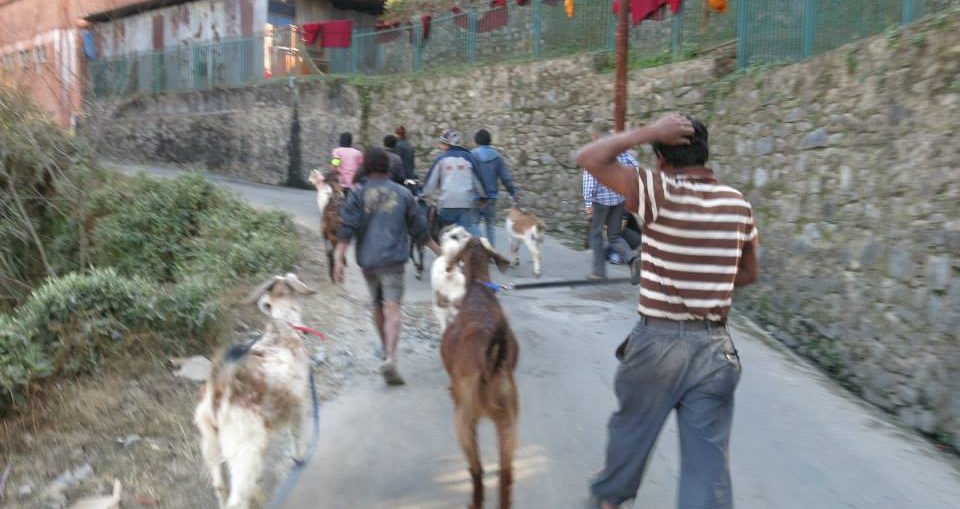 Leading the way were 2 van-loads of goats being brought up from Kopan nunnery (they have been there in quarantine and due to space restrictions at the temporary shelters at the monastery). The monastery goats were herded in three groups, beginning at the monastery lower gate and heading up the road. The last group included the less-abled. Dawa the sheep with three legs, Norbu the young goat with a recent amputation, Nying-Je with wounds, and some of the old-timers who have some minor leg problems.

The route to the land becomes a narrow and steep foot track, with sections washed out from erosion. At one steep section Monlam, a goat from the nunnery, reached out for some tasty looking leaves and lost his footing, falling several metres before sliding to a stop in some bamboo, thankfully unharmed! Most goats were quite stressed by the long march into the unfamiliar and only familiar voices and faces helped convince them to keep going.

On arriving to ‘the jungle’ (the locals’ name for the sanctuary given its current well-vegetated state) the goats and sheep were lead along the different terraces down to the main terrace where the large animal shelter is situated. Once in the front compound, with lots of grass and leaves to browse, in the warm winter sun, they began to relax and make themselves comfortable in their new home. Of course the next challenge was for the monastery goats to meet the nunnery goats, which was done by keeping them separated by a fence to begin with to reduce the risk of fighting.

The new facilities have been very carefully designed to maximise the health and safety of the residents and to help look after the land and vegetation.

Everyone was very pleased at how well the move went and how well the animals have adapted to their new home. Now all we have to do is fundraise to pay back the loan and get regular contributions for the animals upkeep (which is considerable when you consider over 50 animals that require supplementary food, caretakers and other staff, regular and emergency veterinary checks and so on).

If you would like to help support the animals, remember also that the late Khensur Rinpoche Lama Lhundrup explained that the merit of supporting liberated animals is the same as liberating an animal yourself, for without ongoing care and shelter the animals would not survive.